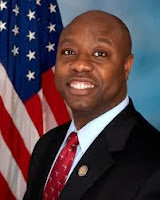 Recently the president of the North Carolina NAACP Rev.William Barber made the following comments about Senator Tim Scott of South Carolina.

"A ventriloquist can always find a good dummy," Barber said Sunday night, according to The State.

Barber said "the extreme right wing down here (in South Carolina) finds a black guy to be senator and claims he's the first black senator since Reconstruction and then he goes to Washington, D.C., and articulates the agenda of the tea party."

As much as I disagree with Tim Scott politically I thinks it unnecessary to insult him. Especially since he unlike many other black republicans on the national scene avoids making incendiary comments about his own people. I believe we can disagree with being disagreeable. To do so only lowers us to the level of those we claim to be against.

Do you think that Rev. Barber's comments were appropriate?