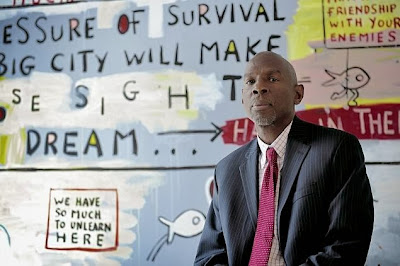 A prominent Harlem charter school advocate who gained national fame in a documentary that examined the country’s educational system is stepping down from his top post.

Geoffrey Canada announced Monday he will resign as chief executive officer of Harlem Children’s Zone, ending more than two decades as leader of a charter school network and non-profit that currently serves more than 12,300 children.

The school system, which prides itself on turning around the lives of disadvantaged students, boasts that 95% of its high school seniors are accepted into college.

“After 31 years, I am taking a new position in the organization, and I am no longer going to be CEO,” Canada told students, staff and community leaders inside the HCZ Promise Academy, a $100-million school that opened last year in the middle of the St. Nicholas Houses on W. 129th St. He had been the CEO since 1990.