Black voters could decide who controls the Senate in 2015 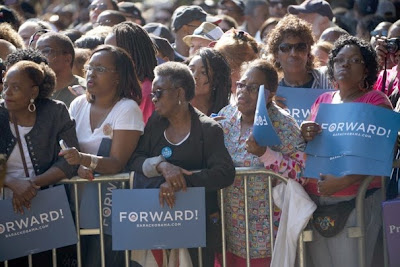 I truly hope people are paying attention to this. Being involved means more than just voting every four years. George Cook, AAReports.com

Black voters played a huge role in delivering Barack Obama to the White House in 2008 and 2012. And in 2014, they will play a huge role in determining whether the president's party can stop Republicans from taking the Senate.

Why? Here are four reasons:

1. Black voters are hugely influential on the 2014 map

Six of the 16 states with the highest black populations are holding key Senate contests in 2014. A seventh -- the most African American state in the country, Mississippi -- is holding a contest that could get interesting if there's a tea party upset in the GOP primary.

This is a highly unusual set of circumstances, especially when you consider that most states with large numbers of African American voters generally don't hold competitive Senate races because they are safely red (in the South, generally) or blue (in the Northeast).

Read more here: Black voters could decide who controls the Senate in 2015

Posted by Councilman George L. Cook III at 10:02 AM