NAACP on passing of Sen. Byrd: A Champion for Civil Rights and Liberties 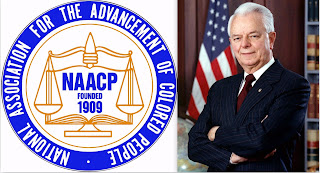 Let me start by stating that Sen. Byrd is no hero to me or to many African Americans but we just can't let Donald Trump spout racist garbage without checking him. The man Hillary Clinton spoke of fondly at the time of his death is not the same man who once led a chapter of the KKK. People can and do change their views on race. Sen. Byrd was one such person.

Donald Trump is now using the fact that Hillary Clinton referred to one-time KKK member/leader Sen. Robert Byrd as a true American original, my friend and mentor at the time of his death in 2010. What Donald Trump leaves out is that at the time of his death Byrd had long renounced his racist past and had a 100% voting record on 33 issues the NAACP deemed critical. Only 16 other US Senators had that designation. In June 2005, Byrd proposed an additional $10,000,000 in federal funding for the Martin Luther King, Jr. National Memorial in Washington, D.C., remarking that "With the passage of time, we have come to learn that his Dream was the American Dream, and few ever expressed it more eloquently." That was the Sen. Byrd Hillary Clinton was speaking of.

He had changed so much that upon news of his death, the NAACP released the following statement praising Byrd:

The NAACP is saddened by the passing of United States Senator Robert Byrd. Byrd, the longest serving member of congress was first elected to the U.S. House from in 1952 and was elected Senator in 1958. Byrd passed away this morning at the age of 92.

"Senator Byrd reflects the transformative power of this nation," stated NAACP President and CEO Benjamin Todd Jealous. "Senator Byrd went from being an active member of the KKK to a being a stalwart supporter of the Civil Rights Act, the Voting Rights Act and many other pieces of seminal legislation that advanced the civil rights and liberties of our country.

"Senator Byrd came to consistently support the NAACP civil rights agenda, doing well on the NAACP Annual Civil Rights Report Card. He stood with us on many issues of crucial importance to our members from the reauthorization of the Voting Rights Act, the historic health care legislation of 2010 and his support for the Hate Crimes Prevention legislation," stated Hilary O. Shelton, Director of the NAACP Washington Bureau and Senior Vice President for Advocacy and Policy. "Senator Byrd was a master of the Senate Rules, and helped strategize passage of legislation that helped millions of Americans. He will be sorely missed."

Founded in 1909, the NAACP is the nation's oldest and largest civil rights organization. Its members throughout the United States and the world are the premier advocates for civil rights in their communities, conducting voter mobilization and monitoring equal opportunity in the public and private sectors.