Marcus Smart was wrong but so was the fan. 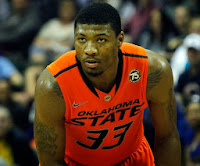 Let me make one thing very clear. Oklahoma State basketball player Marcus Smart was dead wrong for putting his hand on a Texas Tech fan during a game on Feb. 8. Under no circumstances should a player touch a spectator during a sporting event. I think we all understand that and trust me Marcus Smart will face the consequences of his actions.

But what saddens me is the pass that the fan who instigated the incident seems to be getting. The fact that the fan, Jeff Orr has been accused of using racial slurs has been downplayed while Marcus Smart's character and basketball future have been questioned.

As a culture we have devolved to the point where it's just not enough to boo or cheer a team or player. Far too many think that the purchase of a ticker allows them to curse at players, talk about their family members, talk negatively about a players life, and yes call players racial slurs. Many of these same people called Richard Sherman a thug but exhibit behavior much worse than anything he said at a ball game.

No matter how much money players make they deserve at the very least to be treated as human beings. The price of a ticket should not allow one to act in such a manner that would get their ass kicked if that behavior were anywhere else but a sporting venue. Either we are all to have decorum and abide by some sense of common decency or not. It can't be a one way thing.

Posted by Councilman George L. Cook III at 10:33 AM