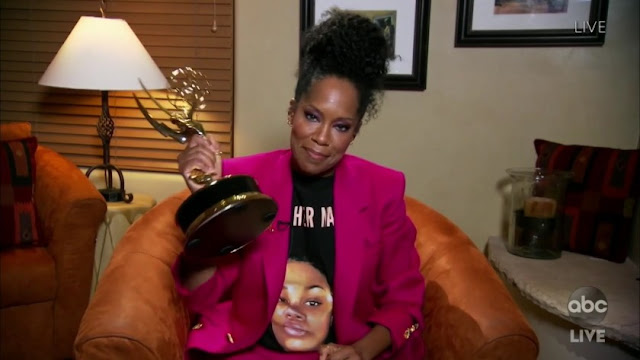 Regina King won an Emmy at the 72nd Annual Emmy Awards for her performance in the HBO series, WATCHMEN.

For Regina King who must have another house just to store her acting Awards this is her fourth Primetime Emmy Award. She won for Outstanding lead actress in a limited series or TV movie this year for her role as Angela Abar/Sister Night.

King accepted the Emmy from her home, wearing a pink blazer over a T-shirt bearing the face of Breonna Taylor with the words “Say Her Name.” She thanked Watchmen executive producer Damon Lindelof and his “brilliant mind” along with the entire writing team, and added: “Gotta vote. I would be remiss not to mention that being a part of a show as prescient as Watchmen.” She ended her speech by paying tribute to the late Supreme Court justice Ruth Bader Ginsburg: “Be a good human. Rest in power, RBG.”

Posted by Councilman George L. Cook III at 6:46 AM