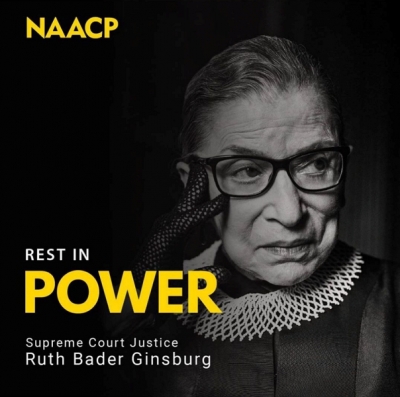 Derrick Johnson, President and CEO of the NAACP issued the following statement tonight on the passing of Justice Ruth Bader Ginsburg:

The NAACP family is devastated by the passing tonight of Supreme Court Justice Ruth Bader Ginsburg. Justice Ginsburg was an incredibly accomplished civil rights lawyer who devoted her entire legal career to the pursuit of equal justice and eliminating discrimination of all types. When President Bill Clinton nominated her to the Supreme Court, he called her the “Thurgood Marshall of gender equality law.”

Justice Ginsburg’s 27-year tenure on the Supreme Court was marked by a passion for justice and the rule of the law. Her long, remarkable record includes her legendary opinions involving disability rights in Olmstead v. LC, and gender equality in the military, United States v. Virginia. She was also known for her powerful dissents, many of which she delivered from the bench. These include dissents in the voting rights decision of Shelby County v. Holder, the gender equity case of Ledbetter v. Goodyear Tire Company Co., and the affirmative action case of Ricci v. Stefano.

Our nation has lost its north star for justice tonight. As we move forward in the weeks and months ahead, we must honor Justice Ginsburg’s memory and extraordinary contributions and remember that the Supreme Court is the ultimate guardian of all of our civil rights and liberties.