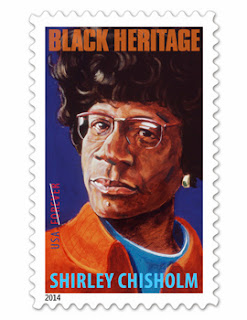 The Shirley Chisolm Stamp is the 37th stamp in the Black Heritage series features a painting of Chisholm by artist Robert Shetterly. The compelling portrait is taken from a series of paintings titled “Americans Who Tell the Truth.” Art director Ethel Kessler designed the stamp.

After her election to Congress, Chisholm scored another historic first in 1972 when she declared her candidacy for the Democratic nomination for President. She later wrote of her unsuccessful bid, “The next time a woman runs, or a black, or a Jew or anyone from a group that the country is 'not ready' to elect to its highest office, I believe that he or she will be taken seriously from the start...I ran because somebody had to do it first.”

The Shirley Chisholm stamps are being issued as Forever” stamps in self-adhesive sheets of 20. Forever stamps are always equal in value to the current First-Class Mail” one-ounce rate.