Sean Hannity is a bold face liar on Benghazi! 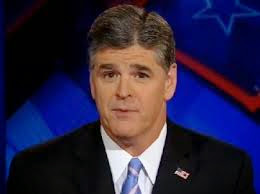 When it comes to Benghazi (okay, and everything else) Sean Hannity has no problem lying or leaving out facts that better put things in context. He has no problem calling Press Secretary Jay Carney a liar or political hack even while he is on air lying. I mean how can this happen with his crack (as in they are actually on crack) team of researchers.

Let's dive into this.

Hannity has repeatedly stated the US forces were told to stand down on both his radio and talk shows. There is just one huge problem.

There was no "stand down" order given during Benghazi attack. Republicans own report from the Republican dominated House of Representatives states so:

V. There was no “stand down” order issued to U.S. military personnel in Tripoli who sought to join the fight in Benghazi. However, because official reviews after the attack were not sufficiently comprehensive, there was confusion about the roles and responsibilities of these individuals.

When it comes to putting things in context Hannity completely leaves out relevant facts such as:

Now this is the United States and Hannity has the right to lie. My question is why is allowed to lie and misrepresent facts on a channel with "News" in it's title?