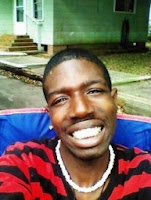 While many are focused on the tragic death of Michael Brown there is still an investigation going on into the less known death of 22 year old Victor White of Louisiana. Victor White was arrested by the Iberia Parish Sheriff’s Office and searched TWICE (that's important here) by police. The police claim that during both searches they found drugs on him. Once at the station police claim White refused to get out of the car and somehow produced a gun (although he was supposedly searched twice) and shot himself in the back. They claim he did this although his hands were handcuffed BEHIND his back. The death had been ruled a suicide by both the sheriff's department and the medical examiner. Now that the family has managed to get a hold of the medical examiner's report (which the examiner would not release) there appears to be one major inconsistency with the police story. You see the reports shows that Mr. White was shot in the chest. Watch more on this story below:

Posted by Councilman George L. Cook III at 5:31 AM

Labels: Iberia Parish Sheriff’s Office, man shots self in the back although handcuffed, Victor White