Where's the Tea Party, Conservatives, and militias in Ferguson? 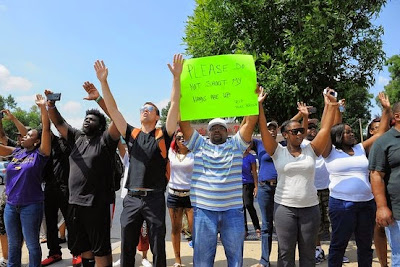 On the surface the question of where's the Tea Party, conservatives, and militias in Ferguson might sound absurd. That is unless you are me. When Cliven Bundy the tax cheat faced off against federal authorities earlier this year the Tea Party and the militias road to the rescue. How dare the government over reach by trying to make someone pay money they legally owe. Those bastards! How dare they try to oppress a real American by sending in jack booted thugs normally known as federal agents.

Now if you follow the logic of these Tea Party groups, conservatives, and militias then it reasons that they should be in Ferguson defending the rights of the people of Ferguson. Aren't they being oppressed by their local government? I mean isn't trying to shut down the media the act of oppressors? Isn't that why they claim to need all of those weapons? You know to stand up against government tyranny and government over reach. 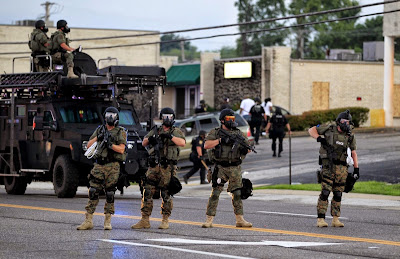 When I first saw the pictures of cops in Ferguson I initially thought I was watching coverage of the situation on the Ukraine until I saw young black men.

Where is the Tea Party decrying the loss of constitutional rights for the people of Ferguson? I'm really wondering why they are not there. I mean isn't what's going on in Ferguson the essence of their tin foil hat fantasies?

Could it be that they can't find Missouri on a map?

Could it be the fearsome appearance of the Ferguson police?

Or could it be that they only defend "Real Americans"? (dog whistle)