Killer of Renisha McBride sentenced to 15-30 years in prison 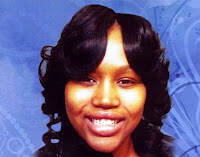 Theodore Wafer, 55, was convicted Aug. 7 by a Wayne County jury on charges of second-degree murder, manslaughter and use of a firearm in the commission of a felony in the killing of McBride.

Wafer also received seven to 15 years on the manslaughter charge and a mandatory two-year consecutive sentence on the felony firearm charge, meaning he'll serve at least 17 years in prison.

The Wayne County Prosecutor’s Office asked for a minimum of 17 years in prison. Wayne County Circuit Judge Dana Hathaway, who presided over the trial, announced Wafer’s sentencing at a hearing that included courtroom comments from McBride’s sister.

Posted by Councilman George L. Cook III at 10:37 AM