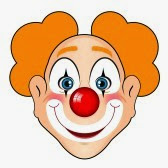 I swear I'm not making this up. A clown in a dunk tank at a fair in Memphis decided that it would be okay to call a black woman a nappy head and make other insensitive comments. He was of course fired but for a country where conservatives believe that there is no racism what does it say when even clowns feel it's alright to publicly vent their racist feelings?