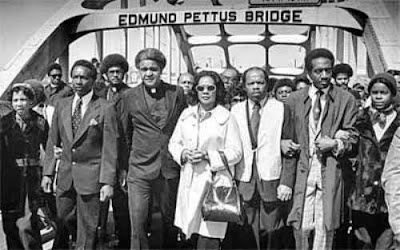 [SOURCE] SELMA, AL (WTVM) - With the 50th anniversary of the pivotal Bloody Sunday march approaching, an online petition to change the name of the march's location has been building momentum online.

A petition initiated on Change.org by the group Students UNITE is collecting supporters to change the name of the infamous Edmund Pettus Bridge. The petition has garnered more than 154,000 signatures in less than two weeks.

Pettus, a native Alabamian, politician, lawyer and judge born in Limestone County, AL in 1821, was a Confederate soldier during the Civil War, a lieutenant in the Mexican-American War, a lawyer whose practice was in Selma, AL and a former U.S. Senator and judge. Most infamously, he was once named as the Grand Dragon of the Alabama chapter of the Ku Klux Klan.

The bridge in Selma was named after Pettus in 1940, and was declared a national landmark in March 2013. The Selma-to-Montgomery march happened on March 7, 1965, and was a key event in the Civil Rights Movement of the 1960s

The petition is urging both the state of Alabama, Selma, AL Mayor George Patrick Evans and the U.S. National Parks Service to remove the former KKK leader's name from the bridge in light of the Bloody Sunday march and what the city of Selma currently represents.

"Selma and the Voting Rights Movement altered the course of history forever, and Selma has done too much for this country to remain unchanged," the petition says. "Selma is currently 80 percent African American, with a black mayor and majority African American local city officials. The name Edmund Pettus is far from what the city of Selma should honor. Let's change the image of the bridge from hatred and rename it to memorialize hope and progress."

Supporters of Students UNITE and the petition have been using the hashtag #MarchON to show their solidarity of the petition. Despite the outcry online to change the name, many Selma city leaders and residents feel a name change is unnecessary and not likely to happen.