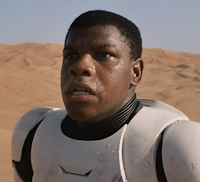 In the weeks leading up to the release of Star Wars: The Force Awakens there was some controversy about the storm trooper played by John Boyega being black and being a lead character, although after seeing all the teaser trailers how anyone was surprised by Finn being a lead is beyond me. But back to the topic at hand.

Many wondered how that could be since storm troopers were supposed to be white. (Am I the only one wondering why some were so quick to want to claim the bad guys as one of them?). The movie itself does a great job of explaining why Finn (Boyega) is black which I wont post here because of the spoilery thing.

But what many of those bitching obviously don't know is that the storm troopers NEVER WERE WHITE!

As shown in Star Wars Episode II: Attack of the Clones (the less said about that movie the better) they were clones of Jango Fett, the father of Boba Fett. The actor, Temuera Morrison that portrayed Jango Fett was Māori. The Māori are the indigenous Polynesian people of New Zealand. So that means the storm troopers were Polynesian which I'm sure is not white.

So everyone can syop bitching about black storm troopers and do what millions already have. Enjoy Star wars: The Force Awakens for the great movie that it is!

MAY THE FORCE BE WITH YOU!
Posted by Councilman George L. Cook III at 5:55 AM