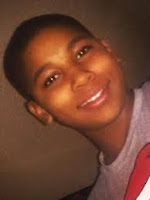 The family of Tamir Rice released the following statement about today's announcement that a grand jury has declined to press charges against the officers involved in the fatal shooting of 12-year-old Tamir Rice by police.

Today, more than a year after Cleveland police shot and killed 12-­year-­old Tamir Rice, a grand jury voted not to indict the shooter. Tamir’s family is saddened and disappointed by this outcome–but not surprised.

It has been clear for months now that Cuyahoga County Prosecutor Timothy McGinty was abusing and manipulating the grand-­jury process to orchestrate a vote against indictment. Even though video shows the police shooting Tamir in less than one second, Prosecutor McGinty hired so-­called expert witnesses to try to exonerate the officers and tell the grand jury their conduct was reasonable and justified. It is unheard of, and highly improper, for a prosecutor to hire “experts” to try to exonerate the targets of a grand-­‐jury investigation. These are the sort of “experts” we would expect the officer’s criminal-­defense attorney to hire—not the prosecutor.

Then, Prosecutor McGinty allowed the police officers to take the oath and read prepared statements to the grand jury without answering any questions on cross-­examination. Even though it is black-­letter law that taking the stand waives the Fifth Amendment right to be silent, the prosecutor did not seek a court order compelling the officers to answer questions or holding the officers in contempt if they continued to refuse. This special treatment would never be given to non-­police suspects.

The way Prosecutor McGinty has mishandled the grand-­jury process has compounded the grief of this family.

The Rice family is grateful for all the community support they have received and urges people who want to express their disappointment with how Prosecutor McGinty has handled this process to do so peacefully and democratically. We renew our request that the Department of Justice step in to conduct a real investigation into this tragic shooting of a 12-­year-­old child.