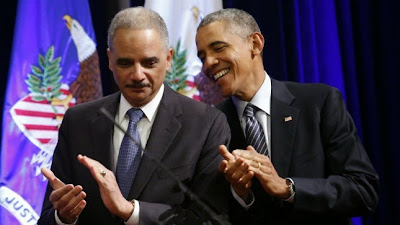 A tearful President Obama on Friday bid goodbye to outgoing Attorney General Eric Holder, one of his closest friends in the administration.

"I'll just come out and say it — he has been one of our finest," Obama said at the Justice Department, where Holder’s official portrait was unveiled.

"Having good men in positions of power and authority, who are willing to fight for what's right, that's a rare thing, that's a powerful thing," Obama said of Holder, wiping away a tear. Holder is serving out his final days in Obama’s Cabinet, with the Senate expected to soon confirm Loretta Lynch to take his place as attorney general.