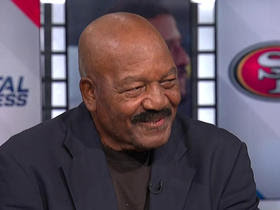 Appearing on Monday's edition of NFL Total Access, Brown weighed in on the controversy surrounding San Francisco 49ers quarterback Colin Kaepernick's recent protest during the playing of the national anthem. During his comments he let it be known that he is with Kaepernick 100%. Read his comments below.

"I listened to him and he makes all the sense in the world. He's within his rights and he's telling the truth as he sees it," Brown explained. "I am with him 100 percent. ... Now if you ask me 'Would I do that?' No I won't, because I see it a little differently. I'm an American citizen, I pay my taxes, I want my equal rights but this is my country, and consequently I don't want to open up for ISIS or anybody that will take away what we've already gained."

While professional athletes have been reluctant to speak out in recent years, Brown believes there are signs that they are becoming more outspoken and willing to deal with the public backlash -- as Seahawks defensive lineman Michael Bennett implored late last month.

"Absolutely. I think Pandora's Box is open. I'm very happy that it is," Brown continued. "So many years, we had the great Michael Jordan who stated that Republicans buy sneakers, too. ... And for a couple of generations it was about making money, not messing with your image. And the agents became the pivotal figure for a lot of these guys. And the agents kept reminding them that you have to be this all-American boy to make these kind of dollars and these dollars are astronomical dollars. So the money came into the culture and created a couple of generations of individuals who did not want to speak up."