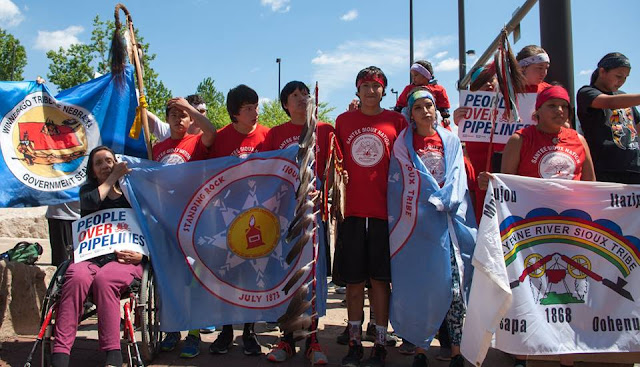 The Standing Rock Sioux Tribe may not be African American but this blog stands with anyone fighting for their rights. The tribe has been fighting to stop a pipeline from being built on it's sacred burial grounds. To those who say this is much ado about nothing, think about how you would feel if you were told to dig up and rebury your loved ones. This blog also condemns the use of dogs on protesters, a move that reignites memories of the dark past of the United States. George L. Cook III AfricanAmericanReports.Com

An American Indian tribe succeeded Tuesday in getting a federal judge to temporarily stop construction on some, but not all, of a $3.8 billion four-state oil pipeline, but its broader request still hangs in the balance.

U.S. District Judge James Boasberg said Tuesday that work will temporarily stop between North Dakota's State Highway 1806 and 20 miles east of Lake Oahe, but will continue west of the highway because he believes the U.S. Army Corps of Engineers lacks jurisdiction on private land.

He also said he will rule by the end of Friday on the Standing Rock Sioux Tribe's challenge of federal regulators' decision to grant permits to the Dallas, Texas-based operators of the Dakota Access Pipeline, which will cross North Dakota, South Dakota, Iowa and Illinois.

Posted by Councilman George L. Cook III at 10:03 AM