If Kaepernick upset you, Trump's lack of patriotism should have you furious 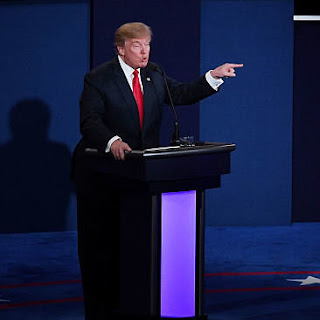 During the NFL's preseason so called "patriots" were apoplectic that SanFrancisco 49ers quarterback Colin Kaepernick refused to stand for the national anthem out of respect to black men who have been gunned down by police.

Kaepernick's actions were just the worst thing ever. These people thought that Kaepernick was disrespecting our fallen soldiers and those serving right now. Kaepernick's stance was an insult to our nation's police officers and would lead to more disrespect for police. There were calls for the 49ers to punish or fine him, some threatened to stop watching NFL games if no action was taken although they were no legal reason to do so.

Worst of all he was unpatriotic in a country where he made millions, you know like Donald Trump. Trump though gets a pass from his supporters for being unpatriotic.

That's right trump is unpatriotic. What else would you call a man who refuses to say that he will acknowledge and accept Clinton as President of the United States WHEN she wins the election. How can a Trump claim to want to make American great again when he doesn't follow our time-honored traditions when it comes to a peaceful transition of power? That tradition is what makes America's democracy great and not a banana republic.

If you were mad at Kaepernick you should be furious with Trump. Kaepernick's actions haven't hurt anyone or anything other than some people's feelings. Trump's stance could hurt a whole lot more and put a permanent stain of this great experiment we call democracy.