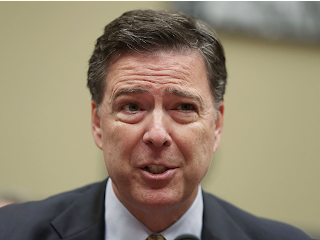 F.B.I. Director James Comey is no friend or hero to liberals/Democrats, but even he is calling nonsense on Trump's claims that President Obama had Trump Towers phone lines tapped. He's not doing it so much to help Obama but to cover the F.B.I.'s rear ends. Read more on this from Mediaite below:

F.B.I. Director James B. Comey has called on the Department of Justice to reject President Donald Trump‘s claims that Barack Obama, while in office, called for an illegal wiretap of Trump Towers during the 2016 Presidential election.

Comey has stated that the highly charged claim is false and must be corrected. In addition, Trump’s accusation implies that the F.B.I. would have broken the law should the allegations be true. Comey has also been working with the DOJ to knock down Trump’s claim as there is virtually no evidence.

A statement by the F.B.I. invalidating the president’s claims would be a huge blow to the office of the presidency, essentially putting the nation’s top law enforcement officials in a position where they could question the truthfulness of the nation’s highest government official.