NFL commissioner denies that Colin Kaepernik is being blackballed 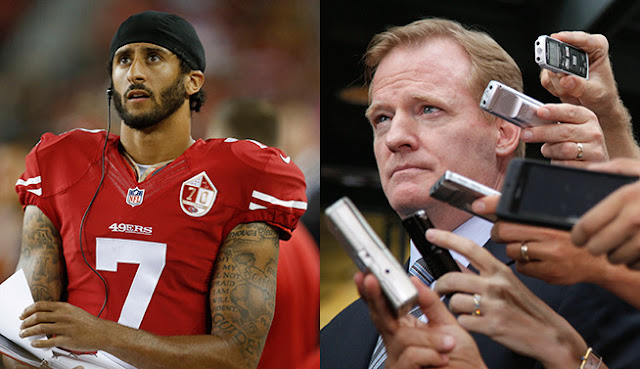 If you believe in zombies, Big Foot, the Loch Ness Monster, and that Biggie, Tupac, and Elvis are all still alive then you might believe NFL commissioner, Roger Goodell about Colin Kaepernick. Goodell says that Colin Kaepernick refusal to stand during the national anthem last year has nothing to do with him remaining unsigned.

During a Rams fan event at Los Angeles Memorial Coliseum Goodell addressed the issue and insisted it’s not because the star once refused to stand for the national anthem.

Goodell tried to make the point that teams "all want to get better," so they'll all be looking to sign the best player available.

"Those are decisions that the 32 clubs are going to have to make individually," Goodell said of signing players. "They're going to give whatever player they think can help them win that opportunity. And I think that's what's great about the NFL is that we're a meritocracy, and you earn your opportunities and you get to keep your opportunities on the way you perform, ultimately. That's what the NFL is about. I think that's why fans love the game. People go out and they earn those opportunities, and it's a competitive league, which is great for us."