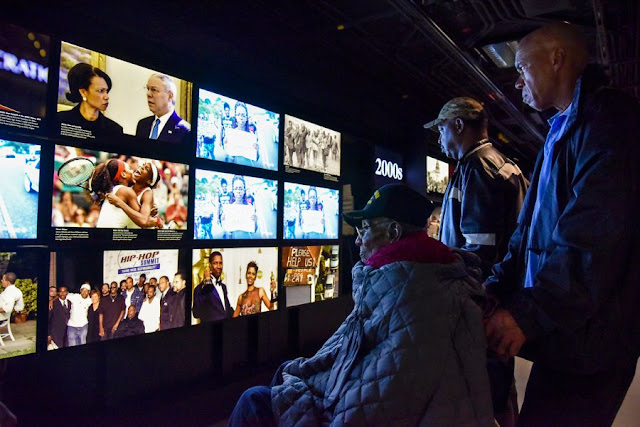 The oldest US veteran of World War II, the 111-year-old grandson of a slave, has received an exclusive tour of the National Museum of African American History and Culture after being flown to Washington on a private jet by a wealthy benefactor. Richard Overton, who turns 112 next month is believed to be the oldest man in the United States and the third-oldest in the world. Overton grew up in Texas, where his grandfather, a former slave, settled after being granted his freedom in Tennessee. He served in the Pacific during World War II in an all-black battalion and worked in a furniture store after the war. On Sunday, Overton took a private tour of the African-American museum in Washington thanks to Robert Smith, a billionaire businessman and investor who is richest African-American in the country, according to Forbes magazine. Volma Overton, a cousin, told AFP that Smith met with Richard Overton on Friday in Austin, Texas, where they both live. Smith, who donated about $20 million to the museum, made the arrangements "for us to have a personal tour, a special tour," Volma Overton said. "We never thought about going to the museum any time lately, but Mr. Smith came by his house to visit Richard for the first time," he said. "He sat and talked to Richard about two hours on Richard's porch, and he said: 'Would you like to go to DC to see the museum? What about tomorrow?' "It happened just like that." The Washington Post said that during the tour, Richard Overton received a call from Colin Powell, the former US secretary of state and ex-general who was the first African-American to serve as chairman of the US military's Joint Chiefs of Staff. Richard Overton was married twice. He divorced his first wife and his second wife died in the 1980s. He has no children. Volma Overton attributed his relative's longevity to his love of cigars and whiskey. "He smokes 15 cigars everyday," he said. "In DC he was desperate for a smoke, but it was so cold! "He doesn't like cold weather."
Newer Post Older Post Home
Subscribe to: Post Comments (Atom)