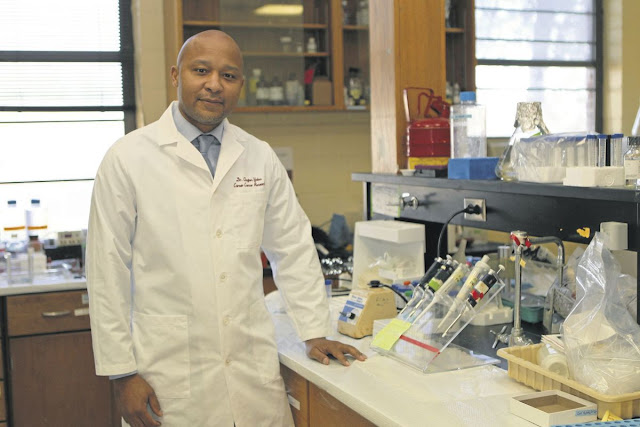 A team led by Tuskegee University researchers have developed a new way to detect the most aggressive and fatal form of breast cancer.

The university and researchers hope the new method may hold the potential for earlier detection and more informed treatment decisions.

The breakthrough was detailed in an article in PLOS ONE,a publication tied to the Public Library of Science. The article, “AR Negative Triple Negative or ‘Quadruple Negative’ Breast Cancers in African-American Women Have an Enriched Basal and Immune Signature,” shows researchers have developed a fourth testing marker to complement the other three biomarker-based methods.

Dr. Clayton Yates, a professor of biology and director of Tuskegee University’s multidisciplinary Center for Biomedical Research, published the team's findings. Support for the research come through the National Cancer Institute’s Comprehensive Partnerships to Advance Cancer Health Equity program, otherwise known as the U54 program.

“Scientifically speaking, our research suggests that the expression of the androgen receptor (the receptor for testosterone), should be added to the current set of prognostic markers — estrogen, progesterone and human epidermal growth factor receptor 2 — used to test for classify and determine the aggressiveness of breast cancer,” Yates said.

“As with any fight, you have to know your enemy. Imagine going into battle not knowing if you needed a BB gun, a shotgun, or a bazooka,” Yates said. “With this additional testing option, physicians will be able to better define the enemy and develop a more precise treatment plan. This, in turn, promises to be more effective for the patient — not to mention safer and less expensive — in the long run.”

Breast cancer currently is the second-most common cancer among females. The new testing method shows significant promise for detecting the most aggressive types of breast cancer, especially among black women. Black women are more likely than white women to be diagnosed at later stages in life and are 40 percent more likely to die from breast cancer after initial diagnosis.