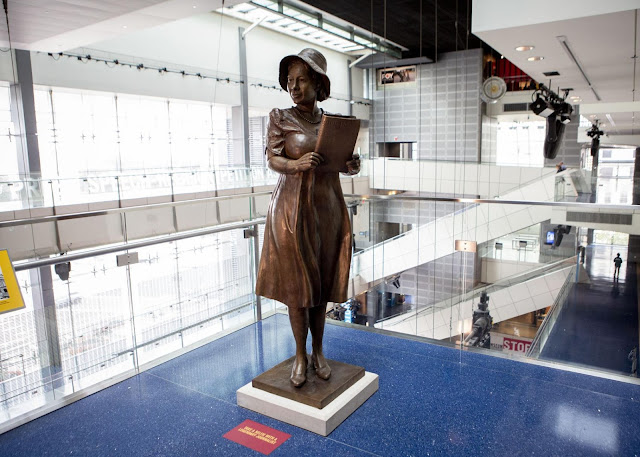 On Sept. 21, a sculpture of Alice Allison Dunnigan, the first African American woman to receive press credentials to cover the White House and Congress, will go on display at the Newseum. The museum will unveil the Dunnigan sculpture in a short ceremony at 1 p.m. at the “Make Some Noise” exhibit on Level 4. Following the unveiling, the Newseum will host a program at 2 p.m. entitled, “Remembering Alice Allison Dunnigan” in the Knight TV Studio. The program will feature Carol Booker, who edited an autobiography of Dunnigan, artist Amanda Matthews, who created the statue and Dunnigan’s granddaughter Soraya Dunnigan Brandon. This program is free with Newseum admission.
Dunnigan, who began her journalism career in Kentucky before moving to Washington, D.C., was a pioneering journalist who rose to the top of her profession despite racist policies that segregated black journalists and sexist attitudes that severely limited opportunities for women in a male-dominated workplace. The life-sized bronze sculpture was created by Kentucky sculptor Amanda Matthews and is being cast at the Prometheus Foundry in Lexington, Ky.
During World War II, Dunnigan moved to Washington, D. C. to work at the War Labor Board. After the war ended, Dunnigan went to work for the Associated Negro Press and became the head of that organization’s Washington Bureau on Jan. 1, 1947, a job she held for 14 years supplying stories to 112 African American newspapers across the United States.
Dunnigan was the first African American woman accredited to report on the White House, covering presidential press conferences. She also became the first African American woman to gain press credentials to report on Congress, the State Department and the Supreme Court. She also made history by being the first African American woman on a presidential tour when she went on the whistle-stop tour with President Truman.
Throughout Dunnigan’s career, she battled the rampant racism and sexism that dominated the mostly white and male professions of journalism and politics. She once famously stated, “Race and sex were twin strikes against me. I’m not sure which was the hardest to break down.”
In 2015, the Newseum hosted a program about Dunnigan, “Inside Media: Alice Dunnigan, Pioneer of the National Black Press.”The program featured Carol McCabe Booker, who edited and annotated a new edition of Dunnigan’s autobiography, “Alone Atop the Hill.”
The sculpture will be on display at the Newseum through Dec. 16, 2018. It will then be taken to Dunnigan’s hometown of Russellville, Ky., and installed on the grounds of the West Kentucky African American Heritage Center as part of a park dedicated to the civil rights movement.