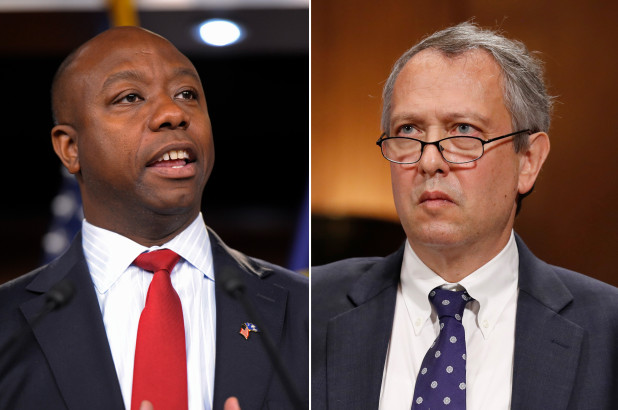 Republican Sen. Tim Scott announced Thursday he would oppose President Donald Trump's nominee to be a US district judge in North Carolina, effectively ending the nomination that had been plagued with accusations that Thomas Farr supported measures that disenfranchised African-American voters.

"This week, a Department of Justice memo written under President George H.W. Bush was released that shed new light on Mr. Farr's activities. This, in turn, created more concerns. Weighing these important factors, this afternoon I concluded that I could not support Mr. Farr's nomination," Scott said in a statement.

Scott, who is the Senate's sole black Republican, told reporters Wednesday that he wanted to speak to the author of a 1991 memo obtained by the Washington Post, which outlines a controversial postcard campaign distributed by the 1990 campaign of Sen. Jesse Helms that the Justice Department said were used to intimidate black voters from going to the polls.

Scott's decision to oppose Farr prevented Farr from being confirmed by the Senate, where Republicans hold a 51-to-49 seat majority. Also opposing Farr was Republican Sen. Jeff Flake, who has sworn off advancing Trump judicial nominees until the chamber votes on a bill to protect special counsels such as Robert Mueller. All 49 Democrats opposed the nomination.