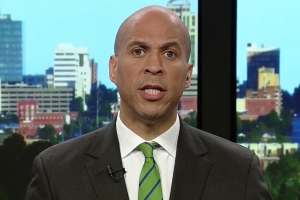 Democratic Sen. Cory Booker on Sunday announced he has reached the required donor threshold to qualify for the fifth Democratic presidential debate despite his campaign running behind on a self-imposed donation fundraising goal of $1.7 million.

The New Jersey senator's announcement comes after the Democratic National Committee announced last week that candidates must meet higher donor thresholds in order to qualify for the November debates. Candidates must raise money from 165,000 separate donors -- including a minimum of 600 donors each in at least 20 states or territories, up from the current minimum of 130,000 donors.

"We have nearly 35,000 donors who have been helping us make this goal. We've raised $1.5 million plus," Booker told CNN's Jake Tapper on "State of the Union" Sunday. "We've actually already crossed the threshold to make the November debates of 165,000 unique donors. The surge and the momentum is great, but yeah, I still need help."

Booker has already qualified for the October Democratic presidential debate, which will be moderated by CNN and The New York Times, but he has not yet met the polling threshold to qualify for the November stage. The DNC has not yet announced the date for that debate.

Posted by Councilman George L. Cook III at 9:45 AM