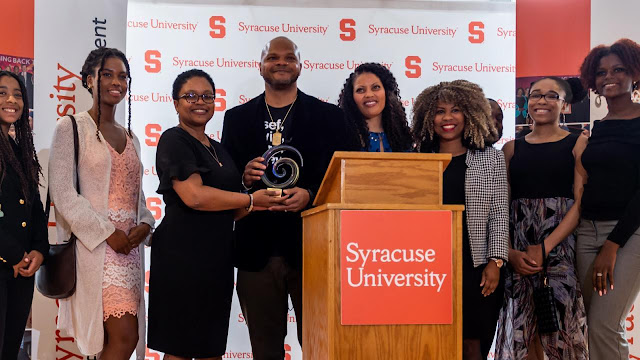 Richardson was able to step foot on the campus he dreamed of attending as a kid.

“It’s surreal,” Richardson said moments before he was honored. “Just being here and being 44 and having that dream at (age) 14, and now I’m here. It’s mind-blowing.”

In 1989, Richardson and four other black and Latino teenagers — Korey Wise, Antron McCray, Raymond Santana, and Yusef Salaam — were falsely accused and arrested for the rape of a woman jogging in Central Park. Richardson was 14 years old at the time of his wrongful conviction. It wasn’t until 2002, when the real perpetrator admitted to the crime, that the “Central Park Five” were exonerated. Now they’re known as The Exonerated Five.

“My mother always told me that one day the truth will come out,” Richardson said in a speech. “I am so thrilled that she is alive to be able to see it.”

Richardson expressed his interest in SU in an interview with Oprah Winfrey that was released in June. He was always a fan of SU basketball and dreamed of playing the trumpet in the university’s marching band.

After seeing the Oprah interview, SU political science major senior Jalen Nash started an online petition calling on the university to give Richardson an honorary degree. The petition has gained nearly 6,000 signatures, but the university has not indicated whether he will receive a degree. The process to get an honorary degree can take several months or up to a few years.

Students, faculty and community members gathered over hors d’oeurves and drinks at the CFAC to honor Richardson by presenting him with several tokens of appreciation. This event was held in partnership with SU’s Office of Multicultural Advancement; Rachel Vassel, assistant vice president of the office, organized and hosted the reception.

Vassel introduced several guests who then gave Richardson gifts to welcome him to the SU family. He received a customized “44” SU basketball jersey, a Yamaha trumpet and an award from the 2019-20 recipients of the Our Time Has Come scholarship.

“I don’t take anything for granted. I want to continue this legacy for years to come,” Richardson said in his speech. “If I’m not around, my name will still be here. My time has come.”

Read more: Kevin Richardson honored with scholarship in his name

Posted by Councilman George L. Cook III at 9:58 AM