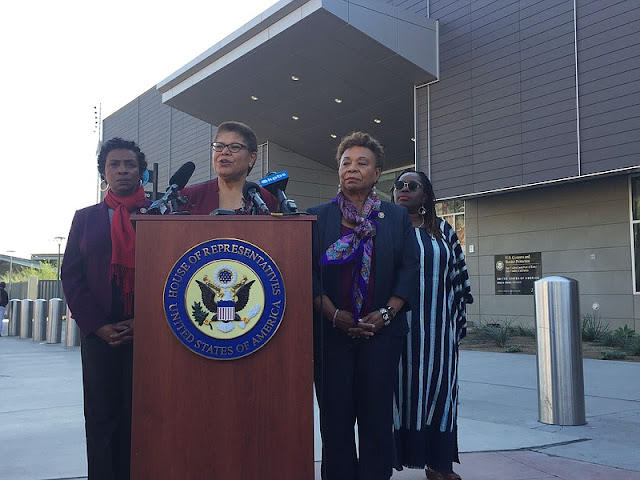 Thousands of Black migrants from around the globe seeking new lives in America are instead stuck in limbo in Mexico. Amid reports of their mistreatment and an African migrant’s death, several members of Congress recently traveled across the U.S.-Mexico border to meet the asylum seekers.

The Congresswomen told BET they heard “horrific” stories from about 50 “mostly young men and women” hailing from Africa, the Caribbean and beyond. All have been impacted by the Migrant Protection Protocols, known informally as the “Remain In Mexico” policy. Implemented in January 2019 by the Trump Administration, the U.S. now returns non-Mexican migrants to Mexico to await immigration court decisions.

Immigration advocates told the visiting members of Congress there are at least 5,000 Black asylum seekers currently in Tapachula, Mexico -- part of an estimated 15,000 Black migrants throughout Mexico. They hail from across the Black Diaspora, with most from Cameroon, the Congo, Ethiopia, Eritrea and Haiti, according to advocates. Black migrants say they’ve faced racism, physical and sexual violence, language barriers and other trauma.

“African and Caribbean immigrants who immigrate to the United States of America are treated as if they are invisible,” said Bass, chairwoman of the 55-member CBC. “Many arrived in South America and then walked north, all to be dehumanized and mistreated at our southern border. We [went] to the border to hear what they have been through. They are an important piece of this story.”

Today, more people than ever live in countries other than the one of their birth, either by choice or necessity. According to the United Nations, the number of migrants globally in 2019 reached an estimated 272 million -- 51 million more than in 2010. Women constituted 48 percent of migrants, and about 38 million migrants are children.

Pew Research Center data indicates 4.2 million Black immigrants reside in the U.S. The reasons for their arrival vary; some are fleeing war and conflict, economic insecurity, or gender-based bias and violence. Climate change is increasingly a factor in people being displaced. Many envision new lives in America where the Statue of Liberty inscription notes in part: “Give me your tired, your poor/ Your huddled masses yearning to breathe free.”

Yet the story of immigration under Donald Trump’s presidency has been rife with controversy. On the campaign trail, Trump promised to do away with Deferred Action for Childhood Arrivals, known as DACA. Created in 2012 by President Barack Obamavia executive order, DACA enabled certain undocumented immigrants who’d arrived in America before their 16th birthday to receive work permits and exemption from deportation for two years. The Supreme Court is currently deciding whether DACA is lawful and can continue; a ruling is expected in 2020.

The Trump administration has also put in place a travel ban impacting several majority Muslim countries. There was also a “zero tolerance” policy that resulted in thousands of families being forcibly separated at the southern U.S. border; babies have been torn from their mothers, and children and adults have been detained in cages. Meanwhile, Trump’s reported `s**thole’ comment about Haiti and African nations (which he denied), and determination to build a border wall have led to protests from advocacy groups and legal challenges.

“Trump’s white nationalist agenda has been harming immigrants since Day 1 of his presidency,” said Lee, a Senior Democratic Whip and senior member of the House Appropriations Committee. “These cruel and bigoted policies have no place in a nation built by immigrants from all walks of life, and we all must keep pushing back so that his xenophobic vision of America does not become our America.”

After visiting Mexico, the CBC members and Rep. Vargas returned to San Ysidro, California, for a Congressional Field Hearing hosted by the House Foreign Affairs Subcommittee on Africa, Global Health, Global Human Rights and International Organizations. Bass, who also chairs that subcommittee, said the purpose was to examine the global migrant surge from a humanitarian perspective and hear testimony from experts.

“How is it that some of the poorest nations around the world can take in people in crisis,” she asked. “What can we learn from these countries? What are the international protocols, norms, standards, and practices that should be followed? I want to know, what can we learn from other countries around the world. But mostly, I want to understand where the United States is with regard to these practices, norms and standards.”

The hearing included testimony from Doug Stephens, a lawyer and former U.S. asylum official who has challenged the legality of the Mexico policy; Kate Clark, Senior Director of Immigration Services for the Jewish Family Service of San Diego which is aiding migrants; Charanya Krishnaswami, Americas Advocacy Director for Amnesty International USA; and Nana Gyamfi, Executive Director of the Black Alliance for Just Immigration (BAJI).

Gyamfi, dedicated her remarks to the late Nebane Abienwi, a 37-year-old asylum seeker from Cameroon. He died on October 1, 2019, reportedly in the custody of the U.S. Immigration and Customs Enforcement (ICE).

Abienwi reportedly arrived at the San Ysidro Port of Entry on September 5, 2019, requesting asylum. About two weeks later, he was sent to the Otay Mesa Detention Center in San Diego. Reportedly, he experienced a hypertensive event in ICE custody, and was transported to a medical center on September 26, 2019. After undergoing treatment for a brain hemorrhage, he was later taken off life support (reportedly against his family’s wishes) and died.

“I want us to take a moment to think about why someone would risk their lives and travel thousands of miles from home to a strange land?” said Gyamfi in testimony provided to BET. “They have experienced physical harm, sexual assault, death of their family and friends, loss of personal items including documentation, family heirlooms, life’s savings and whatever little personal safety that they had. The individual and collective trauma that they hold is unimaginable.”

Gyamfi testified that the asylum process at Tapachula, Mexico, requires migrants to be taken into custody and held in the largest detention center in Latin America, known as Siglio XXI (Century 21). BAJI has been going to Tapachula since August of this year, she said. “Black migrants complain of racist maltreatment in the detention center, including being fed maggot-filled food, being denied health care and sanitary conditions, being forced to sign paperwork written in a language they do not understand, and being stripped of their nationality and declared ‘stateless.’”

Gyami added that U.S. foreign policy — from the failed war on drugs to trade issues — have exacerbated tenuous conditions abroad, spurring migration across the globe.

Rep. Clarke is the daughter of Jamaican immigrants and chairs the CBC’s Task Force on Immigration. The Congresswoman told BET she believes the crisis at the Mexican border is a direct consequence of the Trump administration’s threats of punitive measures to Mexico. There’s also been pressure on Central American countries such as Guatemala, Honduras and El Salvador, known as the Northern Triangle.

Advocates say migrants from the Northern Triangle journeying to the U.S. often cross the border between Guatemala and Mexico. When that region saw an increase in Black migrants earlier this year, Mexico honored the migrants’ right to asylum and allowed them transit, exit visas and travel to its northern border to apply for asylum in the U.S.

However, after President Trump threatened to impose harsh tariffs on Mexico if it didn’t stem the flow of migrants to the border, the country changed its immigration policy to require migrants to apply for asylum and residency in Mexico. “It’s a bullying tactic,” said Clarke, “to bring the hammer down on nations that are vulnerable themselves.”

Trump and administration officials have countered criticism of its immigration policies by saying they are meant to secure U.S borders, prevent criminals from entering, and protect American workers and resources. In a November 14 press briefing, Mark Morgan, Acting Commissioner of U.S. Customs and Border Protection, suggested Congress was to blame.

“If you recall, earlier this year we sounded an alarm — actually, quite a bit — with respect to the border crisis and asking Congress repeatedly to act to fix the loopholes in our broken immigration system, and close the gaps driving this crisis. Unfortunately, not a single piece of meaningful legislation has been brought forward.”

He continued, “And as a result, this country stood by and watched as the crisis worsened, as we reached our peak in May of over 140,000 apprehensions in a single month. However, in the continued absence of congressional action, the President, along with his administration, as well as our hardworking men and women of the Customs and Border Protection and our partner agencies, has taken action. Through continued engagement with the government of Mexico and the Northern Triangle countries, we have initiated a network of initiatives, policies, and of regulations to stem the flow of the migration. Together, we are approaching this as the regional crisis that it is, and we have seen incredible success.”

Immigration has proven a partisan issue in Congress, but legislation has been introduced. Among the latest is the Refugee Protection Act of 2019. U.S. Senators Patrick Leahy (D-VT), Kamala D. Harris (D-CA), Cory Booker (D-NJ) and Rep. Zoe Lofgren (D-CA) are among the lawmakers who led the introduction of the measure. In a press release, the measure is described as a “comprehensive blueprint for restoring and reinvigorating U.S. refugee and asylum systems.” The Senate bill is cosponsored by at least 16 lawmakers, while a companion House bill is cosponsored by at least 31 members.

“The United States must always be a place where refugees are welcomed and encouraged to contribute to society,” said Harris, who added that the measure would help guarantee that refugees and asylum-seekers are welcomed and supported, and “that our immigration system respects the basic dignity of every human being.”