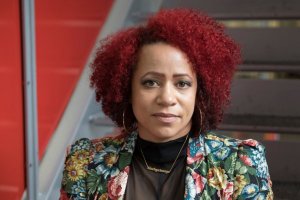 Nikole Hannah-Jones was awarded the 2020 Pulitzer Prize for Commentary for The 1619 Project, The New York Times Magazine’s groundbreaking exploration of the legacy of Black Americans starting with the arrival of the first enslaved Africans in 1619.

The 1619 Project is an ongoing project developed by The New York Times Magazine in 2019 with the goal of re-examining the legacy of slavery in the United States and timed for the 400th anniversary of the arrival of the first Africans in Virginia. It is an interactive project by Nikole Hannah-Jones, a reporter for The New York Times, with contributions by the paper's writers, including essays on the history of different aspects of contemporary American life which the authors believe have "roots in slavery and its aftermath." It also includes poems, short fiction, and a photo essay. Originally conceived of as a special issue for August 20, 2019, it was soon turned into a full-fledged project, including a special broadsheet section in the newspaper, live events, and a multi-episode podcast series.

After the announcement that she has been awarded the Pulitzer Prize, Hannah-Jones told the Times’ staff it was “the most important work of my life.”

The Pulitzer Center congratulates Hannah-Jones on her historic win and looks forward to continuing to collaborate with her and the team at The New York Times Magazine on this important work.