REP. LEWIS ON RECENT POLICE KILLINGS AND CIVIL UNREST ACROSS THE NATION 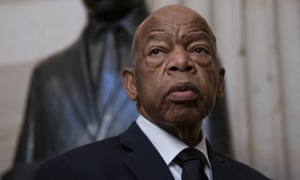 "Sixty-five years have passed, and I still remember the face of young Emmett Till. It was 1955. I was 15 years old — just a year older than him. What happened that summer in Money, Mississippi, and the months that followed — the recanted accusation, the sham trial, the dreaded verdict — shocked the country to its core. And it helped spur a series of non-violent events by everyday people who demanded better from our country.

“Despite real progress, I can't help but think of young Emmett today as I watch video after video after video of unarmed Black Americans being killed, and falsely accused. My heart breaks for these men and women, their families, and the country that let them down — again. My fellow Americans, this is a special moment in our history. Just as people of all faiths and no faiths, and all backgrounds, creeds, and colors banded together decades ago to fight for equality and justice in a peaceful, orderly, non-violent fashion, we must do so again.

“To the rioters here in Atlanta and across the country: I see you, and I hear you. I know your pain, your rage, your sense of despair and hopelessness. Justice has, indeed, been denied for far too long. Rioting, looting, and burning is not the way. Organize. Demonstrate. Sit-in. Stand-up. Vote. Be constructive, not destructive. History has proven time and again that non-violent, peaceful protest is the way to achieve the justice and equality that we all deserve.

“Our work won't be easy — nothing worth having ever is — but I strongly believe, as Dr. King once said, that while the arc of the moral universe is long, it bends toward justice.”