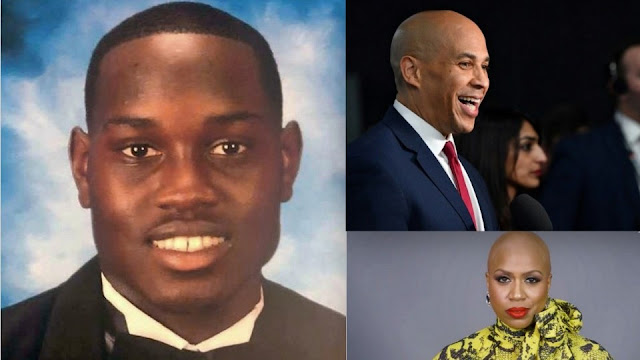 Today, Congresswoman Ayanna Pressley (MA-07), Senator Cory Booker (D-NJ), and more than 80 of their colleagues called on the U.S. Department of Justice (DOJ) to launch a criminal civil rights investigation into the murder of Ahmaud Arbery and an independent investigation into local authorities’ handling of the case. The lawmakers have sent a letter to urge the DOJ to investigate these matters swiftly and thoroughly so that Mr. Arbery’s family can know the truth about what happened to their son.

US Department of Justice

We write to you today with grave concerns regarding the Ahmaud Arbery case in Glynn County, Georgia. As you know, Mr. Arbery, a 25-year old Black man, was harassed and brutally killed while out for a jog on February 23, 2020. In the days and weeks since his murder, and until very recently, Mr. Arbery’s family had been denied their calls for accountability in their son’s murder.

It is deeply disturbing that until the public release of a video recording depicting the heinous incident – a video that the prosecuting attorney’s office has had in its possession for months – no significant actions were taken to hold the men involved accountable. We are troubled by the length of time it took to not only arrest and charge Gregory and Travis McMichaels in this case, but by reports that have outlined disputes between Glynn County police officers present at the scene and the prosecuting attorney’s office — first assigned to District Attorney (DA) Jackie Johnson and later DA George E. Barnhill, both of whom have subsequently recused themselves due to prior professional relationships with the defendants. According to internal documents, and despite mounting evidence of the McMichaels’ culpability, Mr. Barnhill believed there was “insufficient probable cause” to issue arrest warrants to the McMichaels. This was later contradicted by the Georgia Bureau of Investigation, whom within days of taking over the case from local authorities, issued arrest warrants and charged the McMichaels with murder and aggravated assault. The dereliction of duty by Mr. Barnhill and Ms. Johnson’s offices, and agents involved in this case, must be independently investigated.

No mother or father should have to wait 74 days for known suspects involved in their son’s apparent murder to be taken off the street. Make no mistake, there cannot be true justice in this case, for in a just America, Mr. Arbery would still be alive. However, his family and this nation demand accountability for Mr. Arbery’s death. We are encouraged by the initial steps taken by the Georgia Bureau of Investigation in this case and Georgia Attorney General Chris Carr’s recent call for a federal investigation. The recent announcement by the Department of Justice (“DOJ”), Federal Bureau of Investigation and the U.S. Attorney for the Southern District of Georgia that they would begin assessing evidence of this crime is an encouraging step forward in a case where substantial actions have been delayed.

We strongly support the launch of a federal criminal civil rights investigation into the death of Ahmaud Arbery. Because Georgia does not have a law prohibiting or acknowledging bias-based crimes, the DOJ Civil Rights Division is uniquely suited to investigate whether or not the tragic death of Mr. Arbery was a hate crime, or another violation of federal civil rights law. There must be a fair and independent investigation into the handling of Mr. Arbery’s case to determine any constitutional violations by Glynn County District Attorney’s Office or Police Department.

The history of America lays bare the constant threat of systemic racism and white supremacy that continues to rob this nation of Black lives. Time and time again, this country has witnessed the absence of justice in cases from Trayvon Martin and Eric Garner to Sandra Bland and Freddie Gray. For generations, Black Americans have been forced to doubt the value of their own lives and that of their loved ones under a cloak of presumed guilt and brutality that have long infected their communities. Public outcry should not be the impetus for accountability in a society that promises equal justice for all. The need to rid our country of systemic racism and injustice must always be our guiding light.

DOJ must uphold its duty to conduct oversight of misconduct by law enforcement and local authorities and ensure that every community, particularly those communities where incidents like these occur with impunity, is protected from blatant dismissal and violations of their civil rights. We can and must hold accountable those involved in any wrongdoing. We urge you to swiftly and thoroughly conduct all necessary investigations. Mr. Arbery’s family, and the community that grieves with them, deserve the truth regarding Ahmaud’s tragic death.