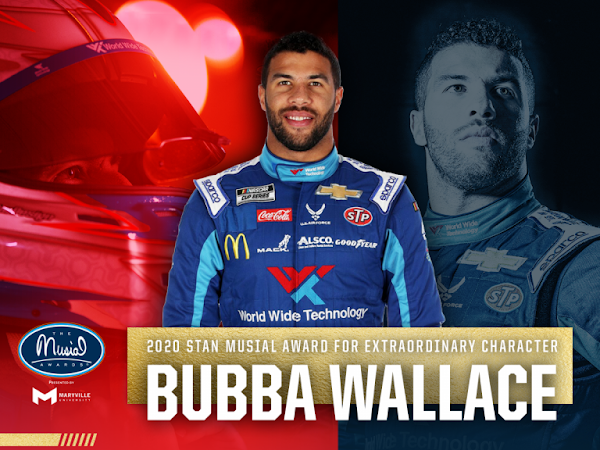 Recognizing class, dignity and strength, it’s one of the most important awards in sports. And this year, it goes to one of the most important sports figures of 2020 – an athlete who has had a profound impact on his sport and the national dialogue surrounding racial justice and unity. NASCAR driver Darrell “Bubba” Wallace Jr. is the recipient of the 2020 Stan Musial Award for Extraordinary Character.

Bestowed annually at the Musial Awards in St. Louis, the Stan Musial Award for Extraordinary Character honors an individual who demonstrates remarkable poise, perseverance and overall sportsmanship. Although this year’s live Musial Awards is unable to take place due to the pandemic, Wallace will be honored – and presented his award – in the Musial Awards television broadcast airing nationally on CBS on Saturday, Dec. 26 (time TBD).

Wallace drives the famed No. 43 car for Richard Petty Motorsports in the NASCAR Cup Series. As the only Black driver in NASCAR’s top circuit, he has been a trailblazer in his sport. In 2013, he won his first of six career NASCAR Truck Series races, becoming the first African-American in 50 years to post a victory in one of NASCAR’s top three national touring series. In 2018, he became the first African-American to race fulltime in NASCAR’s premier Cup Series and finished second in his Daytona 500 debut. Along the way, he has persevered through experiences of being on the receiving end of bigotry and prejudice.

This year, as the nation has grappled with unrest and injustice, Wallace took a courageous, visible stand promoting tolerance, understanding and unity, underscored by his push for NASCAR to ban the Confederate flag at races. Under the media microscope, he has demonstrated tremendous grace, humility and decency.

“Bubba Wallace exemplifies what the Stan Musial Award for Extraordinary Character is all about,” said Frank Viverito, president of the St. Louis Sports Commission, which produces the Musial Awards with the National Sportsmanship Foundation. “He has overcome much to be where he is, and he has courageously stepped forward to take an important stand for change. He is most deserving of an award that stands for sportsmanship and character, and is named for Stan Musial, whose own actions promoted racial acceptance and unity.”

In addition to receiving an award named for the greatest Cardinal of them all, Wallace has another St. Louis connection. He is sponsored by St. Louis-based World Wide Technology. Bob Olwig, V.P. corporate business development, said, “World Wide Technology is proud of what Bubba has accomplished and the impact he is having on NASCAR, society and generations to come. We were thrilled to find out the Musial Awards wanted to recognize him. The character, kindness and courage Bubba has shown make him so deserving of this prestigious honor.”

The Musial Awards – presented by Maryville University – celebrate the year’s greatest moments of sportsmanship and those in sports who embody class and character. The national event and its awards are named for St. Louis Cardinals legend Stan Musial, a beloved baseball superstar and civic icon who personified sportsmanship. In addition to keeping alive the legacy of Stan The Man, the mission of the Musial Awards is to encourage kindness, selflessness, integrity and civility in sports and society – and to inspire people across the nation to be good sports. The Musial Awards has taken place in St. Louis since 2005, and in normal times, occurs the Saturday before Thanksgiving at the historic 3,000-seat Stifel Theatre in Downtown St. Louis. It is produced by the St. Louis Sports Commission and the National Sportsmanship Foundation, a 501c3 nonprofit organization.

Posted by Councilman George L. Cook III at 8:55 AM