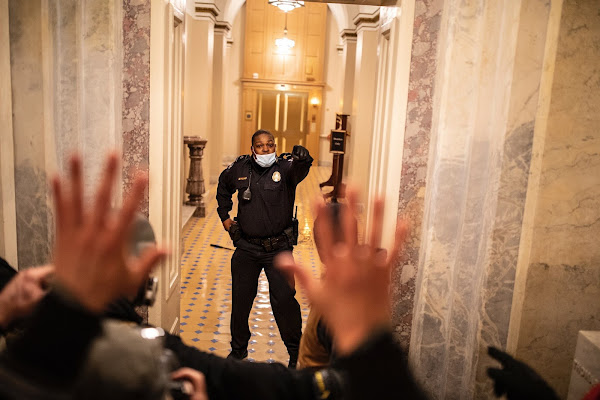 A Black police officer seen diverting a pro-Trump mob away from the Senate’s entrance during the deadly attacks on the US Capitol has been celebrated as a hero.

A video, captured by HuffPost reporter Igor Bobic, appears to show the officer strategically diverting the mob away from a corridor leading to the Senate chambers, where lawmakers were convening to certify the 2020 presidential election.

He was later identified by CNN and other news outlets as US Capitol Police (USCP) Officer Eugene Goodman.

The cop then confronts the man leading the group of rioters. As the man looks towards the entrance to the Senate, Officer Goodman pushes him and appears to divert his attention. The officer continues to engage the rioter as he moves in the opposite direction from the Senate chambers.

According to Mr Bobic, the video was shot at 2.14pm — a minute before the chambers were sealed. Mr Bobic based this on a contemporaneous report from a Washington Post reporter who said the doors were sealed at 2.15pm.

Watch the video of the heroic police officer below: