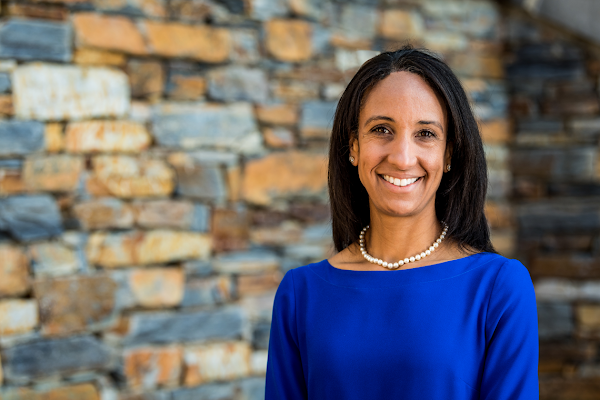 Nina E. King will be the next Vice President and Director of Athletics at Duke University, President Vincent E. Price announced Wednesday. King is currently Duke’s senior deputy director of athletics for administration and legal affairs and chief of staff. She will succeed Kevin M. White, who is retiring after 13 years in the post, on September 1.

“I am thrilled that Nina will be our Vice President and Director of Athletics,” said Price. “In her time at Duke, Nina has demonstrated extraordinary leadership, earning the esteem of our coaches, student-athletes, athletics staff and colleagues in athletics departments across the country. Nina is recognized as a committed advocate for inclusive excellence in collegiate athletics, and she has represented Duke on committees of the NCAA, ACC and many other national organizations. I can imagine no better person to carry on Kevin White’s exceptional record at Duke.”

“First, I am extremely grateful to President Price for providing me with this incredible opportunity to lead the very best athletics department in the country,” said King. “Additionally, I’d like to express my sincere appreciation to Rick Wagoner, Valerie Ashby and the search committee for their belief in me and generous support. I am deeply committed to continuing the strong tradition of academic and athletic excellence at our world-class institution. My priority will be to ensure that the experience is truly elite for our student-athletes, coaches, staff and the entire Duke family. This is a tremendous honor, and I look forward to ushering Duke Athletics into the next chapter.”

King was selected for the position following a national search that was led by G. Richard Wagoner, former chair of the Duke Board of Trustees, and a committee that included Duke trustees, administrators, faculty and current and former student-athletes.

“We set out on a national search to find the best possible leader, someone with the experience, intellect and vision to meet the challenges of the future and a sharp understanding of our commitment to excellence in academics and competition,” said Wagoner. “The committee was enthusiastic about Nina’s candidacy, and I could not be more excited to see her at the helm of Duke Athletics.”

Among Power 5 institutions, King joins Vanderbilt’s Candice Storey Lee and Virginia’s Carla Williams as Black female directors of athletics. She is the first woman to hold the position at Duke.

“I am excited to work with Nina in this new role,” added Valerie Ashby, Dean of Duke’s Trinity College of Arts and Sciences, who served as vice chair of the search committee. “Her commitment to the academic and life success of our student-athletes is inspiring. She is a teacher and a mentor who will only advance Duke’s culture of intellectual rigor and integrity.”

In 13 years on Duke’s staff, King has served as the chief operating officer for Duke Athletics, with direct responsibility for human resources, Recreation and Physical Education, legal and regulatory affairs, as well as strategic planning and special projects. She also oversees Duke’s women’s basketball and football programs.

In addition, King co-teaches a sports business course in Duke’s Fuqua School of Business as part of Duke’s MBA program alongside Dr. White. She also championed the creation and launch of the Rubenstein-Bing ACE program, a collaboration between Stanford and Duke for global civic engagement for student-athletes from both athletics departments.

In February of 2018, King was named to Sports Business Journal’s Forty Under 40 Class of 2018. The annual list honors 40 executives for excellence and innovation in their respective careers, all before the age of 40. Later that year, she was tapped to the Leaders Under 40 Class of 2018, honoring sports business executives from around the world. In 2019, Sports Business Journal named King among the leading power players in college sports, while Adidas selected her to the “Next Up” class in 2016, which recognized senior-level administrators ready to take the next step as athletic directors.

King has one year remaining as a member of the NCAA Division I Women’s Basketball Committee, after serving as Chair in 2020-21. The 10-person group’s charge, among many duties, is the selection, seeding, and bracketing for the annual NCAA Women’s Basketball Championship. King also serves on several ACC and Duke University committees and was previously a member of the NCAA Committee on Institutional Performance.

King received her bachelor’s degree in accountancy from the University of Notre Dame where she participated as a student manager and eventually as the head manager for the women's swimming and diving program, and her juris doctor degree from Tulane Law School. She served internships in the Notre Dame Athletics Department, NCAA and Nike, Inc.

Prior to joining Duke University, King served as the Director of Rules Education in the Notre Dame Athletics Department from 2005-08.

She is a member of Women Leaders in College Sports, Sports Lawyers Association, University of Notre Dame National Monogram Club and the Florida Bar Association. Additionally, King serves on the Arizona State University College of Law Sports Law and Business Program Advisory Board as well as the Durham Academy Board of Trustees.

King and her husband, Rick, are the parents of Connor Stephan and Austin Casey.