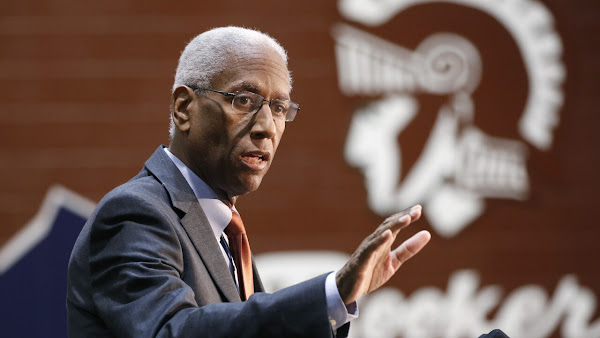 Congressman A. Donald McEachin (VA-04) issued the following statement after the U.S. Naming Commission released a narrowed list of options, including African American Lt. General Arthur Gregg, to rename Fort Lee and eight other U.S. military bases across the nation:

“The U.S. Naming Commission has been tasked with the critical responsibility of renaming military installations honoring individuals who took up arms against the United States to preserve the institution of slavery. Fort Lee in Central Virginia was shortlisted as one of the first nine to be renamed. Since that time, I have advocated for Fort Lee to be rededicated in honor of Lt. General Arthur J. Gregg, a thirty-five year veteran of the U.S. Army and a celebrated military logistician who broke barriers to rise through the ranks from private to three-star general.

“Since the inception of this process, the U.S. Naming Commission has received more than 34,000 recommendations. I am thrilled that Arthur Gregg remains on the shortened list of 87 names, and I reiterate my call to rededicate Fort Lee as Fort Arthur Gregg. He is one of the most highly decorated Black military officers in U.S. history and represents the very best of the American Armed Forces.

“For far too long, the heroism, bravery, and sacrifices of Black servicemembers has been inadequately recognized and revered. We must rectify that injustice and honor the brave African Americans who defended our nation and its ideals. Renaming Fort Lee as Fort Gregg would be an incredible acknowledgment, not only of Lt. General Gregg’s contributions, but of the innumerable sacrifices men and women of color have made for generations in service to our nation.

“I will continue to advocate for Fort Gregg and engage with Admiral Michelle Howard, Chair of the Naming Commission, throughout this process.”

Background: Rep. McEachin has consistently advocated for Fort Lee to be renamed in honor of Lt. General Arthur J. Gregg. Following an independent commission organized by Rep. McEachin which agreed that the military base should be rededicated in honor of Lt. General Gregg, Rep. McEachin and Majority Whip James E. Clyburn sent a letter to Admiral Michelle Howard. Rep. McEachin then led a cohort of state and local leaders in reiterating that call. Finally, Rep. McEachin, once again joined by Majority Whip James E. Clyburn, led a letter with Members of the Congressional Black Caucus supporting the rededication of Fort Lee as Fort Gregg.