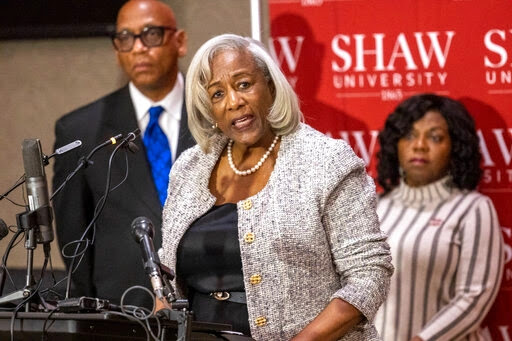 Shaw University, a historically Black university in North Carolina announced Monday that it has filed a complaint with the Department of Justice seeking a review of a search of a bus carrying students during a traffic stop in South Carolina last month.

The university’s complaint states that a lane violation would be insufficient justification for a drug search and students’ right to privacy was violated because while the driver consented to a luggage compartment search, passengers didn’t consent to a search of their individual luggage. It also alleges that Operation Rolling Thunder disproportionately targeted Black drivers.

Shaw University President Paulette Dillard has accused law enforcement officers in Spartanburg County of racially profiling the 18 students traveling on a contract bus from Raleigh, North Carolina, to a conference in Atlanta on Oct. 5.

Two South Carolina sheriffs have denied that racial profiling played a part in the traffic stop and said the bus was pulled over because it had been swerving.

At a news conference Monday, Dillard said the issue is how the alleged minor violation turned into a drug search, whether every stop prompts such a search and, if not, what does trigger a search.

“The harmful effects of eroding individual rights under the pretext of law and order are real – and they are rampant all over the country,” she said. “Let’s be clear… racism is about power and systems; and just because there isn’t a knee on someone’s neck doesn’t mean that no harm is being done.”