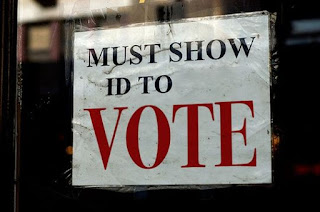 A federal court in Texas on Wednesday struck down the state's controversial voter identification law, granting an injunction that bars state officials from enforcing the measure.

U.S. District Judge Nelva Gonzales Ramos ruled that the law was enacted with the deliberate intent to discriminate against black and Hispanic voters. Ramos said that it violates the Voting Rights Act and the 14th and 15th Amendments of the Constitution.

The original 2011 law, Senate Bill 14, one of the most restrictive in the nation, requires registered voters to present one of seven forms of government-issued photo ID in order to cast a ballot.

Lawmakers responded to previous judicial pushback against that bill by passing Senate Bill 5, a revamped version of the voter ID law this summer. The judge on Wednesday issued an injunction barring enforcement of that measure as well.

That measure created options for voters who say they cannot "reasonably" obtain one of the seven forms of identification outlined by the state.

But in her ruling Wednesday, Ramos said that the revamped measure preserved the original bill's discriminatory features.

Posted by Councilman George L. Cook III at 5:19 AM No comments: