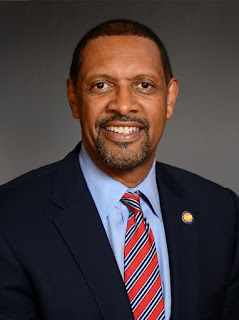 Vernon Jones, a polarizing Democratic state lawmaker in Georgia says that he is resigning after he broke party ranks to endorse President Donald Trump’s reelection.

Jones, who represents parts of DeKalb and Rockdale counties, said that he will not complete his current term because was "sick and tired of me and my family being attacked and harassed by the Democratic Party."

Jones’ endorsement of Trump was quickly blasted by other Georgia Democrats. State Sen. Nikema Williams, chair of the Democratic Party of Georgia, issued a statement calling Jones an “embarrassment” and said he “does not stand for our values.”

On Wednesday, the Georgia lawmaker responded, saying that he was an "independent thinking " and that his "first amendment right to freedom of speech is under seige."

"I intend to help the Democrat Party get rid of its bigotry against Black people that are independent and conservative. I endorsed the White guy (Donald J. Trump) that let Blacks out of jail, and they endorsed the White guy (Joe Biden) that put Blacks in jail," Jones said. "Turn the lights off, I have left the plantation. Someone else can occupy that suite."