It's official! The Human Torch is now black! ( in the movies anyway ) 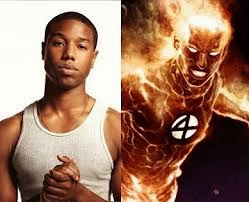 Well it's official. Much to the chagrin of some fan boys and even more racist out there Micheal B. Jordan has been cast as the Human Torch in the upcoming Fantastic Four reboot. To the racist out there I would say get over it and no the Black Panther can't be white...LOL. If you are going to be upset be upset that they are actually making another Fantastic Four movie. I mean except for Jessica Alba does anyone remember anything about the first two movies.

Yes there is the issue of The Human Torch's sister being white but this is damned comic book movie anything is possible.

Congratulations to Michael B. Jordan!