Why Florida's Stand Your Ground laws make it a great place for punks to live. (ad campaign) 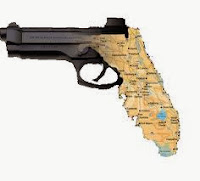 Hi all, this is George Cook of AAreports.com. Recently there has been a spate of Stand Your Ground cases in Florida that have gained national attention. The most recent being the tragic Michael Dunn murder case. I decided to investigate why all these cases seem to take place in the Sunshine State. I reached out to the best investigative team I could find. That's right, Bill O'Rielly's mythical investigative team. But they do exist. I have a picture below to prove it.

This crack team of investigators hasn't really uncovered a reason for all of the shootings yet. But they have uncovered a draft of a planned tourism ad campaign. I have decided to share the startling script for a commercial planned for the ad campaign with you.

Why Florida's Stand Your Ground laws make it a great place for punks to live.

Spokesman: Having trouble planning your next vacation?

Spokesman: Are you a gun owner? Do you like shooting defenseless people? Are you a punk who is scared of his own shadow? Is the only thing that you can beat is your meat? Speaking of meat, do you have a little dick? Do you like to start trouble even though you are incapable of defending yourself?

Spokesman: If the answer to all of those questions is yes then Florida is for you. With our Stand Your Ground laws you can start as much shit as you want, kill the person that you started the altercation with, and be let off by one of our well meaning but obviously confused juries.

Spokesman: No really, that's how it works. We prefer that you shoot the blacks but we know at times that others will have to be shot in the name of your weakened manhood ( i.e. your little dick ). Also please make sure to kill your innocent victim as this makes things easier during your trial. Survivors equals jail time. And don't worry if you don't own a gun with our liberal gun laws as long as you can fog up a mirror and promise to take any meds you are on you can own the firearm of your dreams.

Spokesman hold up his arms

Spokesman: Oh and one last thing. We apologize but shooting people at Disney World is prohibited as the happiest place on Earth has some issues with that sort of thing.

I was shocked. No really how could they not get George Zimmerman for this ad campaign? But anyway this is all we have dug up for now but as the crack investigative team uncovers more I will report it to you.