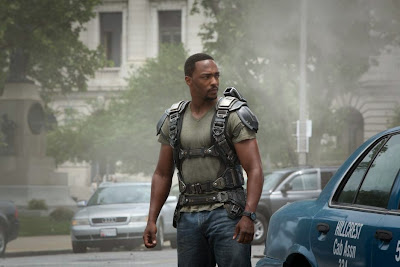 For Anthony Mackie, landing the role of the Falcon in "Captain America: The Winter Soldier" meant more than inking his dream deal with Marvel.

"When I heard I got the role I broke down in tears," said Mackie in a recent interview. "I realized two years from that date some little brown boy was going to be at my door in a Falcon costume on Halloween. When I was a kid I didn't have that. It wasn't like I could get asked, 'Who do you want to be for Halloween?' and say Shaft. Being the Falcon is monumental."

Roughly six months before filming began on "The Winter Soldier" in April 2013, directors Anthony and Joe Russo offered Mackie a role in the comic-book adaptation.

"It was epic," recalls Mackie, who admits he didn't know much about the character Sam Wilson, who becomes the Falcon, one of the first African-American superheroes in a mainstream comic.

"I read up on him and immediately got into the gym," he added with a laugh. "I thought if I am wearing that much spandex I have to be in shape."

When "The Winter Soldier" hits theaters Friday, it will likely become the role for which the 35-year-old Mackie is most known. But it was his portrayal of a bomb disposal team sergeant in Kathryn Bigelow's Oscar-winning war thriller "The Hurt Locker" that paved the way for mainstream success.