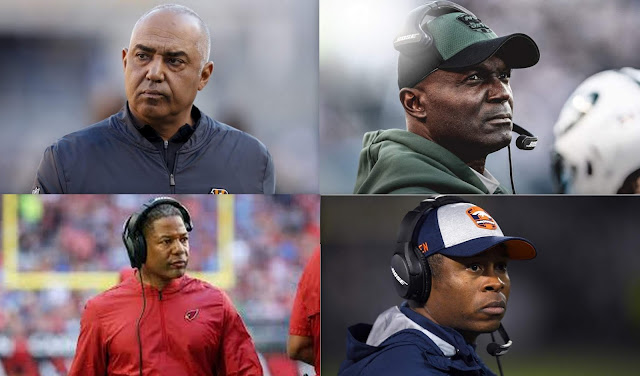 The day after the NFL season is a time where teams will be reevaluating their season and firing their head coaches, but many people are concerned that “Black Monday” has severely impacted some of the black coaches in the league.

There have been eight head coaches from different NFL teams that have been fired so far, but four of those coaches are black.

Here is a list of some of the coaches that have been fired so far, according to Sports Illustrated:

Marvin Lewis: The Cincinnati Bengals coach told his staff that he had been fired.

Vance Joseph: The Denver Broncos let go of their head coach on Monday after going 6-10 this season.

Steven Wilks: The Arizona Cardinals have fired coach Wilks after a rough season of going 3-13.

Coaches losing their jobs at the conclusion of the regular season is routine and expected, as they fall victim to the merciless pressure from owners and fans to succeed year after year. In addition to the five black coaches fired, three white coaches were let go this season, in Green Bay, Tampa Bay and Miami. But with the N.F.L. under pressure to increase the percentage of minority coaches and executives, the makeup of the latest class of jettisoned coaches was especially startling.

The two black head coaches still in the N.F.L. are Anthony Lynn of the Los Angeles Chargers (12-4), who are headed to a wild-card playoff game Sunday against the Baltimore Ravens, and Mike Tomlin of the Pittsburgh Steelers (9-6-1).

With eight coaching vacancies, it is possible that some of the recently dismissed coaches will be leading candidates for those openings; their experience and certain attributes may be a better fit with other teams. Jackson, for example, was on Lewis’s coaching staff in Cincinnati. And there are other minority candidates, like the Kansas City offensive coordinator Eric Bieniemy and Stanford Coach David Shaw, whose names have popped up in coaching discussions.

But the next several weeks will unquestionably heighten the scrutiny on the N.F.L.’s hiring practices and how reliably, or willingly, the Rooney Rule will be employed.

Gulliver would not admit something that many onlookers and people around the N.F.L. have long suspected: that teams have been doing only the bare minimum to comply with, or sidestepping, the Rooney Rule. After all, if the rule was working as intended, and the percentage of minority coaches and executives was growing steadily, why would the rule need to be strengthened?

Under the new regulations enacted a few weeks ago, when teams are looking to fill positions, they must interview at least one minority candidate from a list kept by the league’s Career Development Advisory Panel, or a minority candidate not currently working with a team. Teams also must keep detailed records of who they interview, which is perhaps a response to criticism from minority candidates who say they are routinely called, but not formally interviewed, by teams trying to do the least possible to fulfill their obligations. After it was first established, the Rooney Rule appeared to be having an impact. By 2011, eight N.F.L. teams had coaches of color, the most to that point, or since.

Posted by Councilman George L. Cook III at 9:41 AM