Ferguson, Missouri a perfect example of what happens when blacks don't vote. 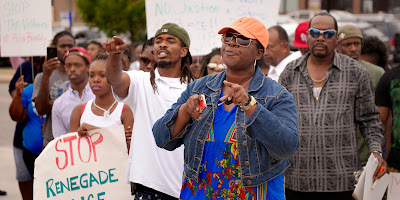 When I first started blogging I had a blog titled Let's Talk Honestly and I think it's time to talk honestly about the town of Ferguson Missouri. First I want to give my condolences to the young man's family and to voice my support for those who are PEACEFULLY protesting. But now back to talking honestly. How is it possible that a town that is predominantly black can only have one black elected black official? There is an answer and it's one some may not like but I think it's the sad truth. George Cook AfricanAmericanmReports.com.

In light of the Michael Brown shooting we are hearing a lot the town of Ferguson Missouri. It is a town of about 20,000 people that is 70% black. It is also a town with only ONE elected black official.

During a interview on NPR the town's democratic chair Patricia Bynes who is African American made the following statement when asked why there was only one black elected official.

...Well, anything other than a presidential election there is low voter turnout. And the African-American community has been disenfranchised for a very long time. When you have people who are worrying about can I get a job - can I get to work - can I put food on the table - when election day on Tuesday comes around, that is the furthest thing from their minds. And the whites that live in the community - they participate. And so they vote for who they want for counsel and mayor, and they don't always put practices in place that are best for the majority population there.[SOURCE]

While Bynes made what some may consider valid excuses they are just that, excuses. Our ancestors faced death and some did die to get us the right to vote and if nothing else we should repay that sacrifice by voting. How can you have tremendous power and cede it to someone else?

The only way a town that is 70% black can only have one black elected official is a complete lack of political involvement and engagement by the black community.

We know that black voters are there because in the chairs statement she says that they come out for presidential elections. But they obviously don't understand that local elections are the ones that impact your daily life.

Some will say that because of racism or the gold boys network it's hard for people to get involved politically. I'm not going to deny that but the low voter turnout in Ferguson shows that racist don't have to hold blacks back because they are not trying to move forward.

Because of that low voter turnout they have a police force that doesn't reflect the diversity of the community it serves and a local government that seemingly is not worried about the black communities concerns.

The people in Ferguson have to do better if they want better and stop with the damn excuses on election day.

I sincerely hope that the tragic death of Michael Brown spurs more political involvement in Ferguson and other communities. I also it becomes an example of what happens when African Americans don't participate politically.