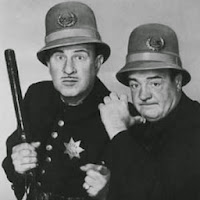 It's been two weeks and the Ferguson Police Dept. (not to be confused with the Keystone Cops) has just released what it claims to be the incident report from the Michael Brown shooting. They released only after the ACLU threatened to sue to get it. Well now we have it and the damned thing is almost blank and reveals no information about the shooting itself. Don't take my word for it, look for yourself.