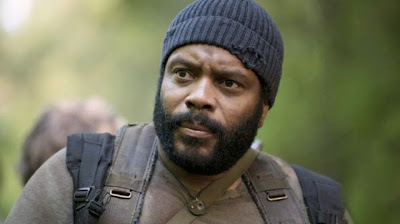 Now let me first state that I love AMC's The Walking Dead, it's my favorite TV show. It's also one of the most diverse, well written, and acted shows on television. But I have noticed one troublesome trend, being the old black male character when a new black male character shows up is the equivalent of being a "red shirt" on Star Trek. I like to call it the add a black man kill a black man rule.

Think about it. Yeah T-Dog didn't actually do shit but he was doing okay until Tyreese showed up and then what happened? T-Dog died, although heroically while saving Carol. For a minute Oscar a former prisoner was with the group but he too kicked the bucket not too long after the character of Tyreese was introduced. Then Later Bob shows up but since there were only two black guys everything seemed cool. But as luck would have it Noah and Father Gabriel showed up. Four black guys at one time! Ah, hell naw! So not to long after Bob becomes barbecue. A little latter in one of the best Walking Dead episodes ever Tyreese dies after having one hell of a fever dream and getting bit by a kid walker. Really? I mean the TV version of the character pissed me off more often than not but he could have went out better than that. Am I the only one noticing a pattern here?

And no I did not forget Shumpert, the black guy that was one of the Governor's henchman who never spoke, but he wasn't a major character. (But don't worry he's dead too.) Also the Morgan character is more of a guest star who only shows up for more than two minutes when the writers/directors decide to produce classic episodes so I didn't include him either when it comes to this rule.

Now one could attribute the number of deaths of black male characters to the large African-American population in the Atlanta area and the writers trying to be realistic. It could also be something a little more sinister and I'm tempted to alert Al Sharpton about this situation. LOL. So do you think there's anything to my theory?