You know the Tuskegee Airmen but do you know these other black military heroes?

If you are like me you have a great respect for the Tuskegee Airmen. You can make the argument that without them there is no Dr. Martin Luther King Jr, they broke down barriers and showed the true strength and courage of black men. They valiantly fought for a country that they knew would treat them as second class citizens once the war was over, but they did it knowing what it would mean for the Black Community. Their military record and the commendations speak to the heroes that they were. But they are not the only black military heroes we should know of.

There were others such as The Harlem Hellfighters, The Montford Point Marines, Benjamin O. Davis, and The Golden 13. Learn a little more about them through test and video and get links to books about them below. 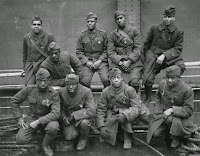 The Harlem Hellfighters were an African-American infantry unit in WWI who spent more time in combat than any other American unit. Despite their courage, sacrifice and dedication to their country, they returned home to face racism and segregation from their fellow countrymen.

With the beginning of World War II African Americans would get their chance to be in “the toughest outfit going,” the previously all-white Marine Corps. The first recruits reported to Montford Point, a small section of land on Camp Lejeune, North Carolina on August 26, 1942. By October only 600 recruits had begun training although the call was for 1,000 for combat in the 51st and 52nd Composite Defense Battalions.

The men of the 51st soon distinguished themselves as the finest artillery gunners in the Marine Corps, breaking almost every accuracy record in training. Unfortunately, discrimination towards African American fighting abilities still existed and when shipped to the Pacific, the 51st and 52nd were posted to outlying islands away from the primary action. The only Montford Marines to see action, and record casualties, were the Ammunition and Depot Companies in Saipan, Guam, and Peleliu. Private Kenneth Tibbs was the first black Marine to lose his life on June 15, 1944. 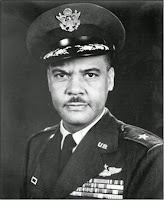 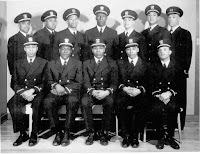 In January 1944 sixteen black enlisted men gathered at the Great Lakes Naval Training Station in Illinois to begin a cram course that would turn them into the U.S. Navy's first African-American officers on active duty. The men believed they could set back the course of racial justice if they failed and banded together so all would succeed. Despite the demanding pace, all sixteen passed the course. Twelve were commissioned as ensigns and a thirteenth was made a warrant officer. Years later these pioneers came to be known as the Golden Thirteen, but at the outset they were treated more as pariahs than pioneers. Often denied the privileges and respect routinely accorded white naval officers, they were given menial assignments unworthy of their abilities and training. Yet despite this discrimination, these inspirational young men broke new ground and opened the door for generations to come.

Read more about The Golden 13: http://www.aaregistry.org/historic_events/view/golden-thirteen-begin-training

Posted by Councilman George L. Cook III at 9:09 AM