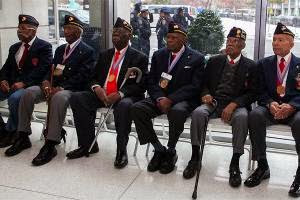 In 2012, Congress authorized the Congressional Gold Medal to be awarded to each of the 20,000 Montford Point Marines or to their families in recognition of the accomplishments and sacrifices made during a time of segregation.

“It’s a great honor for anyone to give their service to our country and knowing what my dad did, was a great gift,” said Jemere Smith, Knowles’ daughter.

Montford Point Marines were the first African-American Marines to serve in the U.S. Marine Corps. They got the name because of their segregated training site at Montford Point, North Carolina. Along with family and loved ones in the audience, was Ambassador Theodore Britton Jr., a former Marine who served beside Knowles as a Montford Point Marine.

“We had a great time. He was a lot of fun, (but) he took care of business, and didn’t take any stuff from no one because he knew what he was doing,” said Britton, the honorary Consul General of the Republic of Albania. “I was pleased to serve with him.”

“My time in service was very educational; it was like a college education, reading, writing, and learning,” said Britton. “I came out a very well educated person even though I didn’t formally go to school.” Between 1942 and 1949 over 20,000 African-American Marines were trained. Of those, 13,000 served overseas areas including Vietnam, Japan and Guadalcanal.

To date, at least 400 Montford Point Marines have received this honor.