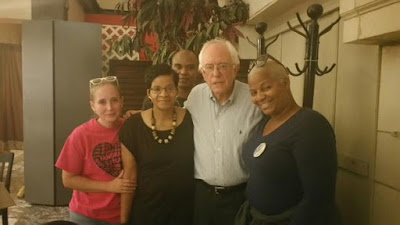 In an era when every moment is tweeted and politicized, Bernie Sanders elected not to capitalize on a meaningful meeting with the mother of Sandra Bland.

The Rev. Hannah Adair Bonner, a pastor at St. John’s Church in downtown Houston, wrote in her blog about noticing the Vermont senator at another table while she was eating dinner with Geneva Reed-Veal, whose daughter became a face of the Black Lives Matter campaign following her death in police custody in July.

“He did not impose upon Ms. Geneva to ask for a picture of his own. He did not use the moment as an opportunity to promote his campaign,” she wrote. “He took no record; he made no statement. He did not try to turn it into a publicity stunt.”,/p>

Bonner, who is a Black Lives Matter activist, said she was impressed by everyone’s sincerity during the serendipitous moment.

The Democratic presidential candidate told Reed-Veal that the death of her daughter was inexcusable and promised he would continue to “say her name.” At the debate on Oct. 13 in Las Vegas, Sanders stayed true to his word when answering a question submitted by a law student through Facebook: “Do black lives matter, or do all lives matter?”