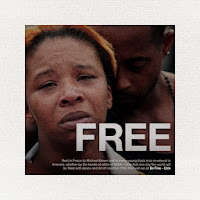 Some have falsely accused Hip Hop of sitting out of the Michael Brown shooting tragedy. That is not true. Some have made statements while others like The Game, T.I., and J. Cole have released songs in honor of Michael Brown or discuss the shootings of unarmed black men. Yes there is much to criticize in Hip Hop but when Hip Hop artist step up and attempt to be socially conscience we need to acknowledge that also. Check out a few of those songs below:

Be Free by J. Cole